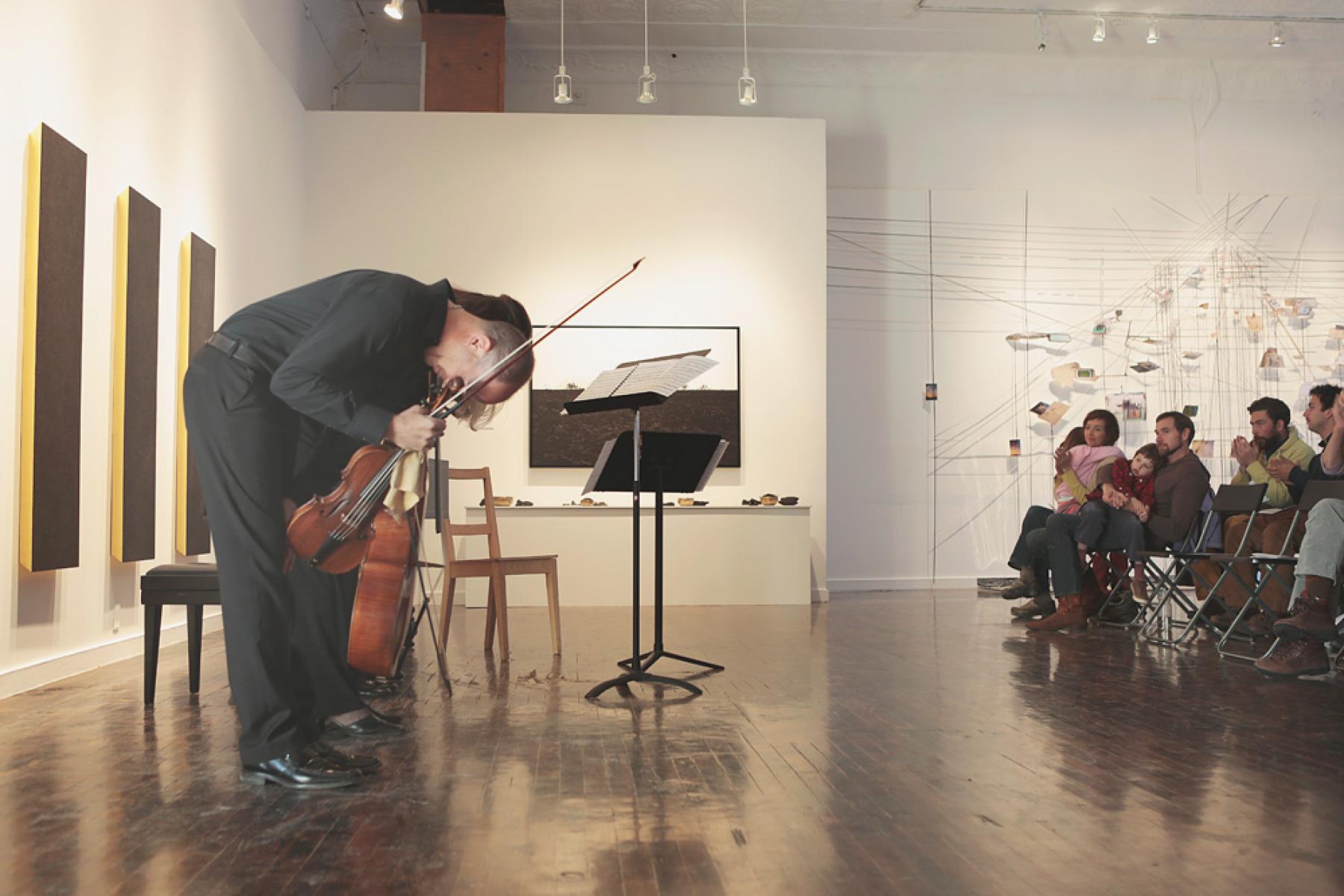 The Sebastian Ensemble played an intimate concert in Ballroom Marfa’s north gallery. The Sebastian Ensemble — with Stephen Redfield on violin; Susan Patrick, harpsichord; and Katie Rietman, cello — is a group dedicated to the performance of Baroque chamber music on original instruments at low pitch.

Their evening-length program served as an aural reflection of the art works from The El Paso Museum of Art’s concurrent ’s Golden Age exhibition. The composers of these lived and worked in the countries and within the cultures, even among the very artists, featured in the exhibition. Sebastian Ensemble imagined that the musical and visual artists of this period provided inspiration to each other, and that those relationships could be brought to light through this concert. The program featured the music of: Willem de Fesch (Dutch); Jean-Baptiste Loeillet (Flemish); William Byrd (English); Johann Sebastian Bach (Germanic); Jean-Marie LeClaire (French); and Dario Castello (Italian).

Violinist Stephen Redfield is a professor at the University of Southern Mississippi School of Music, is well known as a soloist and chamber musician on both modern and baroque violin. He performs as concertmaster of the Santa Fe Pro Musica, and the Victoria Bach Festival, where his performances as concertmaster and soloist have been produced on discs and broadcast nationally. He also leads the Arizona Bach Festival, and frequently the Oregon Bach Festival as well, where he has participated in numerous recordings, including the Grammy Award-winning disc “Credo.” Stephen’s baroque violin is from the mid-18th century, by the Hopf family of Klingenthal, Germany.

Katie Rietman, currently living in New York City but originally from Amarillo, Texas, has performed as a baroque cellist on over 40 CD recordings and numerous concerts and radio broadcasts with notable baroque and classical period instrument ensembles. Her performing career has taken her to 19 countries, and so far the favorites were Peru, Portugal, Italy, and Argentina. Her cello just celebrated its 222nd birthday and was made by William Forster in London. She loves to cook and learn languages in her spare time, and can’t decide whether her favorite music is Handel or bossa nova.

Susan Patrick is an Associate Professor Emerita in the Music Department at the University of New Mexico, where she taught classes in music history for 30 years. She has played harpsichord with the New Mexico Symphony Orchestra, the Desert Chorale, Santa Fe Pro Musica, the Santa Fe Symphony, and other ensembles. She has also been active in many chamber groups, including the Albuquerque Baroque Players, of which she is a founding member, and she has presented solo recitals. Susan owns two harpsichords, both by the North Carolina builder Richard Kingston, a two-manual copy of an 18th-century French instrument and a smaller, one-manual, prototypical Flemish model. She has studied harpsichord with Arthur Haas in New York City and from Elisabeth Wright at Indiana University.